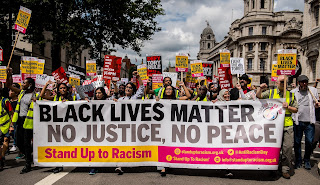 I noticed from the news a few police officers only pointing their guns at the rioters.  If they would have been Black, officers would have fired several shots into the crowd.  Trump and those around would use that to degrade the Black community and charges of the ringleaders would have been more severe.

I would further say that if Trump would have been Black he would not even have been elected President and if elected would have been impeached and convicted in the Senate.  I believe the 25th amendment would have been invoked against him.  This country has let Trump get away with a lot from the first time he came down those golden escalators and belittled Mexican immigrants saying they bring crime and drugs and are rapists.  Trump whipped his followers into a frenzy and they did his bidding.  Those rioters embarrassed this country and if they would have been Black we would never hear the end of it.

I don't condone this but what is worse some looting and damage or an insurrection where rioters storm the US Capitol and obstruct Congress and basically attempt a coup.

1/10/2021 11:39:00 AM
I thank God for Technology.  I am from South Georgia but now live in Richmond, Virginia and the church I attended does live stream of the Sunday Service and Bible Study on Wednesday.  Our pastor is Bishop Wade McCrae.  Today he preached a sermon called, "It Didn't Break Me".  In it King Nebuchadnezzar demands that 3 Hebrews bow down to his god an engraven image.  Meshach, Shadrack, and Abednego did not bow and were thrown into the fire where they were not consumed.  God protected them and Jesus walked in the fire with them. This example of God's love and mercy is something we can see in our lives.  Many times when I was lead astray I thought if only I would have stuck to the Bible teachings.  God is love and he wants us to love others as we would love ourselves.  Bishop McCrae preached The Problem they encountered and Their Purpose was exposed.  He said that people would insinuate things about you Christians.  We don't have to worry about the negative things that
Post a Comment
Read more