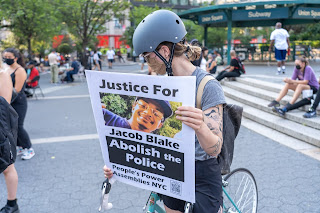 Back in August 2020, Jacob Black, a young Black man was shot in the back 7 times by a Police Officer.  The police were there  concerning a prior offense by Blake. Today, Jan 5., 2021 Michael Graveley the Kenosha, Wisconisn, District Attorney decided not to file charges against that police officer, whose name is Rusten Shesky.  All this as reported in the New York TImes.
How many times will a shooting like this happen before there is real change?  The police need to be reformed but can they teach restraint in the heat of the moment?   Officers are to protect and serve but they have a right to preserve there own life.  However they do not have a right to shoot and kill or maim our Black men.  Police need to do more to reach out to the Black community.  To all communities.  Its not good that your first real encounter with the police should be when you've may have done something wrong and you get arrested.
I know first hand how hard police officers work.  They work long hours with little praise from the community.  That needs to stop too.  I've had my beefs with police but I let them go because I know that the majority of them are good, honest, and dedicated officers.  We can't ever get violent because of the actions of police that's for movies and rap videos not in real life.  Do not let someone lead you down a path where it is hard to recover.  In other words you don't ever want to be arrested.
According to the New York TImes, Jacob Blakes family is planning to sue the City and Police.  Maybe that is how they will get justice!!

7/27/2020 09:32:00 AM
John Lewis dedicated his life to service from civil rights to serving in the House for the state of Georgia since the 80's.  During a time when their was a real struggle for civil rights in the Black Community, Lewis was a champion for the cause.  He was a Freedom Rider and the last surviving member of the "Big Six" organizer and speaker at the March on Washington where Martin Luther King gave his famous "I Have a Dream" speech. Yesterday John Lewis's body was driven over the Edmund Pettus Bridge where "Bloody Sunday" happened when police attacked protesters 55 years ago who were marching to Selma, Alabama. John Lewis's life is a testimony of what Black America should aspire to.  As a young man in the 60's he lived the civil rights struggle.
Post a Comment
Read more