Trump Rioters overrun the US Capitol 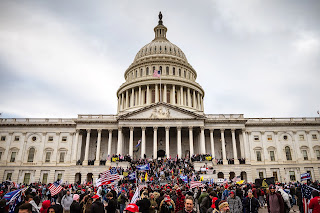 Inspired by a speech Trump gave yesterday according to CNN that Trump told his supporters to march to the Capitol and he would be there with them.  Four people were killed including one woman who was shot by Capitol police.  CNN and others are calling this riot an insurrection which only happened one other time and that was during the War of 1812.  The rioters broke windows and got in and they also breached the entrance and overran the few police standing watch.
Congress reconvened after 8pm to certify Biden's election win.  Nancy Pelosi, Speaker of the House, is demanding that Vice President Pence invoke the 25th amendment to remove Trump or she said she would call for Trump's Impeachment.